Thinking About the Dollar

The U.S. may be heading into its worst recession in 40 years. Normally, such a development would result in a declining U.S. dollar. Instead, the dollar is strengthening as seen in the figure below which shows a weighted average of the dollar against its trading partners (click on figure to enlarge): 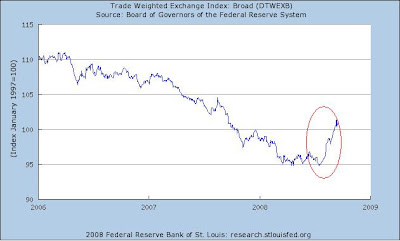 So what explains the rapid appreciation of the dollar? Bloomberg says the following:

Oct. 25 (Bloomberg) -- The dollar gained the most in 16 years against the currencies of six major U.S. trading partners as a global economic slowdown spurred demand for the greenback as a haven from losses in emerging markets.

``The foreign-exchange market is basically saying we are in a global recession and perhaps a very, very deep one,'' Richard Franulovich, a senior currency strategist at Westpac Banking Corp. in New York, said in an interview on Bloomberg Radio.

``We are in a financial crisis,'' said Richard Clarida, a global strategist at Newport Beach, California-based Pacific Investment Management Co., which oversees $830 billion in assets, including the world's biggest bond fund. ``The flight to quality is boosting the dollar and the yen.''

Emerging-market currencies tumbled as Argentina seized private pension funds, and Belarus, Ukraine, Hungary and Iceland joined Pakistan in requesting at least $20 billion of emergency loans from the International Monetary Fund. Brazil's real dropped 8.2 percent to 2.3075 against the dollar, the South African rand decreased 10.4 percent to 11.18 and the Russian ruble fell 3.2 percent to 27.1991.

So a negative economic shock that originated in the United States--the downturn in the U.S. housing market--has set off a global recession that is causing a flight to the dollar and is thus increasing its value. If this understanding is correct, then I have failed to appreciate the full extent of the exorbitant privilege the United States gets from having the main reserve currency of the world.
Update: Mark Thoma directs us to Paul Krugman, Dani Rodrik, Edward Harrison, and Simon Johnson for discussion on the stresses in emerging markets from the declines in their currencies.
Posted by David Beckworth at 10:11 PM