The Fed's Contribution to the Financial Crisis

So Rowe has drank the "saving-glut" Kool Aid and sees no culpability for the Fed. His justification for this conclusion is that since inflation was not accelerating in the early 2000s it must be that the Fed did not push interest rates below the natural interest rate level. A stable inflation rate, however, is not a sufficient condition for macroeconomic stability. This is evident when one considers that the inflationary effects of an overly accommodative monetary policy--a positive aggregate demand shock--can be temporarily masked by gains to aggregate supply. A close look at the data seems to indicate this was case in 2003-2005: productivity growth accelerated just as the fed pushed interest rates to floor. The figure below illustrates this point. It shows the year-on-year growth rate of productivity versus the real (ex-post) federal funds rate (click on figure to enlarge): 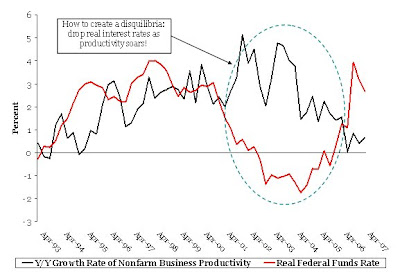 It is worth noting that higher productivity growth rates are typically associated with higher real interest rates, not lower ones. When productivity growth--which provides a proxy for profitability--diverges so far from the real federal funds rate--the cost of borrowing to invest in this profitability--as it did during this time a credit boom is inevitable. Given the Fed's monetary hegemon status, this credit boom went global and created a global liquidity glut.

Clearly, there was more than just loose monetary policy behind this financial crisis (see Barry Ritholtz for a nice summary). But as I have argued here on this blog and elsewhere, inordinately loose monetary policy between 2003-2005 played a key part in stoking the coals of the housing boom during that time.
Posted by David Beckworth at 9:52 PM