Inability to Smooth Consumption = A "Doozy" of a Recession

Standard economic theory tells us that individuals will try to smooth consumption over the business cycle. This can be seen in the figure below. It shows the year-on-year (y/y) growth rates of consumption and investment--the two biggest expenditure components of GDP--over time and across business cycles. Consumption is represented by the blue line, investment by the red line, and the officially dated recessions by the grey columns. (Click on figure to enlarge) 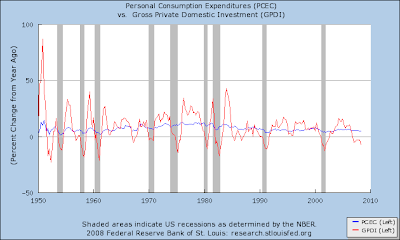 This figure indicates that relative to investment, the y/y growth rate of consumption has been remarkably stable--evidence of consumption smoothing. So should this give us comfort going forward into to current recession? Will individuals continue to smooth their consumption, providing an offset to the weakening economy? Henry Blodget (ht Felix Salmon) emphatically says no:

The last recession was mild. The stock market and corporate profits tanked, but consumer spending--long the major engine of the US economy--danced merrily on through. In recent decades, it has ever been thus: bearish analysts and strategists have been underestimating the voracious spending habits and resilience of the US consumer for 50 years.

Unfortunately, at risk of invoking the four most expensive words in the English language, "this time it's different." This recession, to quote the great Julian Robertson, will be a "doozy."

Because the US consumer is finally broke. For thirty years, we piled on debt and then spent almost every new penny we got. This borrowing spree was made possible by a smorgasbord of no-money-down lending products and ever-appreciating asset prices. Unfortunately, the situation has now changed. The lenders who created those products have now been demolished, and asset prices are falling fast. And this is leaving American consumers with no choice but to cut back.

Analyst John Mauldin explained this week how growing consumer debt in the form of Mortgage Equity Withdrawals allowed consumer spending to power right on through the last recession (What's home-equity withdrawal? When your house price rises, you borrow more, keeping your debt to house-value percentage the same. Then you spend these "earnings."). Thanks to the housing crash, consumers have less and less mortgage equity to withdraw, so this source of cash is rapidly disappearing. As consumer net worth shrinks, other sources of financing--credit cards, home equity loans, car loans, student loans, etc.--will follow a similar path, and consumers will increasingly be limited to spending what they make.

[T]ake a look at GDP during the last recession as reported (blue bars) and after factoring out the impact of mortgage equity withdrawal (red bars). The bottom line: without that source of consumer cash, we would have had a nasty recession, and our growth would have been anemic since.

Bottom line: consumption will not be the economic hero it has been in past recessions.
Posted by David Beckworth at 9:43 PM