Is the Federal Reserve (Fed) making a similar mistake to the one it made in 1936-1937? If you recall, the Fed during this time doubled the required reserve ratio under the mistaken belief that it would reign in what appeared to be an inordinate buildup of excess reserves. The Fed was concerned these funds could lead to excessive credit growth in the future and decided to act preemptively. What the Fed failed to consider was that the unusually large buildup of excess reserves was the result of banks insuring themselves against a replay of the 1930-1933 banking panics. So when the Fed increased the reserve requirements, the banks responded by cutting down on loans to maintain their precautionary level of excess reserves. As a result, the money multiplier dropped and the money supply growth stalled as seen in the figure below. (click on the figure to enlarge.) 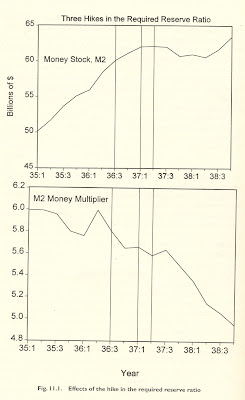 This development, in conjunction with a contractionary fiscal policy, led to the recession of 1937-1938 and ultimately prolonged the Great Depression.

Now in 2008 the Fed did not suddenly increased reserve requirements, but it did just start paying interest on excess reserves. The Fed, then, just as it did in 1936-1937 has increased the incentive for banks to hold more excess reserves. As a result, there has been a similar decline in the money multiplier and the broader money supply (as measured by MZM) which I documented yesterday. If the Fed's goal is to stabilize the economy, then this policy move appears as counterproductive as was the reserve requirement increase in 1936-1937.

So why is the Fed paying interest rates on excess reserves? The answer from the Federal Reserve Board and other commentators is that this policy move makes the federal funds rate more manageable. Jim Hamilton gives a more compelling reason:

It's clear that the Fed is now also using yet another tool to balloon its balance sheet, namely, deliberately encouraging banks to sit on their excess reserve deposits. When these started to shoot up at the end of September, I initially attributed this to frictions in the interbank lending market. But with the announcement on October 6 that the Fed would begin to pay interest on those deposits, and the further announcement on October 22 that the Fed is now raising that interest rate to within 35 basis points of the target for the fed funds rate itself, it is clear that the Fed has now settled on a deliberate policy of encouraging banks to just sit on the reserves it creates, giving it another device with which to expand its balance sheet without increasing the quantity of cash held by the public.

Now the reason the Fed is ballooning its balance sheet is to be able to "buy" targeted assets from the troubled financial sector without actually increasing the overall money supply. The idea, as I understand it, is to restore confidence to financial markets--what Paul Krugman calls the "Face Slap Theory"--without actually creating any additional spending or inflationary pressures. Pardon me for being skeptical, but from what I can see this approach has only encouraged banks to hoard more excess reserves. I may be missing something here--and please let me know if I am--but it seems like we are making the same policy mistakes that were made in 1936-1937.
Posted by David Beckworth at 1:13 PM