The Interest Rate Conundrum That Wasn't

Although macroeconomic forecasting is fraught with hazards, I would not interpret the currently very flat yield curve as indicating a significant economic slowdown to come, for several reasons. First, in previous episodes when an inverted yield curve was followed by recession, the level of interest rates was quite high, consistent with considerable financial restraint. This time, both short- and long-term interest rates--in nominal and real terms--are relatively low by historical standards.Second, as I have already discussed, to the extent that the flattening or inversion of the yield curve is the result of a smaller term premium, the implications for future economic activity are positive rather than negative.

Other reasons given around this time for not viewing the inverting of the yield curve as pointing to a recessions were that (1) other financial indicators such as the rise in stock prices indicated solid economic growth ahead and (2) the conundrum was a global phenomenon, not just a U.S. one. We now know the inverting of the yield curve was not a "conundrum", but simply a sign of the recession to come. The term premium and other financial indicators pointing up interpretations were off the mark in this case, while the global scope of inverting yield curves meant a global recession was in store.

The figure below--which shows the 10 year-3 year treasury yield curve spread, the NBER-dated recessions, and the recession that presumably started in 2007:Q4--indicates that during the time of the "conundrum" the yield curve spread was simply doing what it does best: predicting a recession. (Click on figure to Enlarge.) 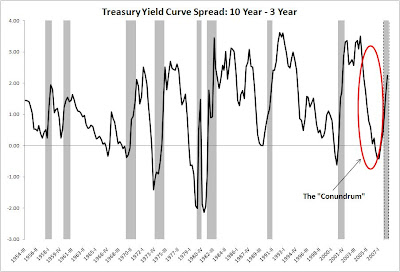 Although many observers somehow missed this straightforward interpretation of the inverting yield curve, others got it right. For example, Calculated Risk wrote in 2005 the following:

I think the PRIMARY reason for Greenspan's conundrum is that the economy is weaker than it appears. Using GDP growth and unemployment, the US economy is healthy. But the level of debt (both consumer and government), the real estate "boom" that seems based on leverage and loose credit (see Volcker's recent comments), and the poor employment situation (especially the low level of participation) indicate an unhealthy economy. I believe this recovery is being built on a marshland of debt and the bond market is reflecting this weakness.

For some observers, then, there was no "conundrum". The inverting yield curve was simply a sign of future economic weakness. How prescient they now look.
Posted by David Beckworth at 3:38 PM