The Fed's Balance Sheet: a Problem or an Opportunity? 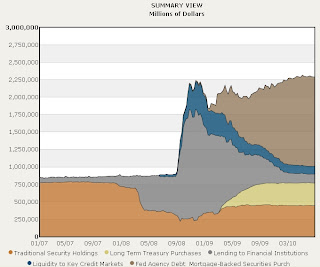 (Click on figure to enlarge. Source: Cleveland Fed)
Is the Fed's expanded balance sheet a problem or an opportunity? It has grown from approximately $860  billion in early 2007 to about $2.3 trillion today.  That is an increase of over 250%. This enlargement of the Fed's balance sheet implies a corresponding increase in the monetary base.  Obviously, this large of an increase in the monetary base, if multiplied into increases in broader monetary aggregates like M1 or M2, has the potential to fuel spending and become highly inflationary.  But it hasn't happened as most of  the new monetary base is sitting in banks as excess reserves.  It is not being lent out and is far from living up to its reputation as  "high-powered money". Moreover, the market expects this to be the norm for years as inflation expectations across all horizons are falling.  The Fed's balance sheet, then, currently appears to be anything but a problem with regards to inflation.  Now someday it could be a problem, but right now it is not and that indicates the Fed is failing in its efforts to stabilize spending--the one thing the Fed can and should be doing.
Now since the Fed's balance sheet is not  currently a problem it actually has the potential to be useful.  In fact,  it presents a great opportunity to help change inflationary expectations and thus stabilize spending.  How so?  By publicly acknowledging  the inflationary potential of the Fed's expanded balance sheet.   Yes, this seems contrary to what I just wrote above, but that is exactly why it needs to be done.  If enough public officials and other influential observes express concern  about the Fed's balance sheet being inflationary and do it repeatedly then the public will become concerned too.  Inflationary expectations will then increase and  will thus lower current real interest rates, decrease the demand for money (i.e. increase velocity), and improve the outlook for the troubled household balance sheets (by increasing future asset values).
Now inflationary expectations could overshoot using this approach and there are better ways to stabilize expectations like having the Fed explicitly commit to an inflation, price-level, or nominal GDP target.  But since the Fed seems reluctant to commit to an explicit target this seems like the next best approach.  So talk it up! Sound the alarm! Inflation is coming!
Posted by David Beckworth at 10:42 AM