More on the Fed's Power

James Hamilton adds to the growing chorus of observers who are arguing the Fed can do more if it really wanted to do so.  He makes the same argument made here and in other places that the Fed still has the ability to (1) enlarge and alter its balance sheet and (2) change expectations:

The claim that a central bank could become completely unable to debase the currency if it wanted has always seemed odd to me. Even if reserves and T-bills become equivalent assets (and at the moment they surely are), reserves are not equivalent to any number of other assets. Nothing prevents the Fed from buying longer-term assets, continuing to create reserves at will for the purpose until the yields on those assets adjust...

Or for that matter, the Fed could start buying goods directly, or equivalently, let the Treasury buy the goods and have the Fed simply buy up all of the debt that the Treasury cares to issue. That the price of goods would be unaffected regardless of the quantity purchased seems quite implausible.

And even if we limit ourselves to conventional open market operations, the fact that banks are currently satiated with reserves does not mean that the Fed has no powers to affect current economic activity. As long as we believe that at some future date we will have moved away from the satiation point and return to a regime in which short-term interest rates are once again meaningfully positive, open market operations at that future date will have their usual power to affect interest rates and prices. Those future price levels and interest rates are in turn tied to current prices and long-term rates through expectations. So, the theory goes, by signaling today an intention of delivering higher inflation rates in the future, the Fed could help stimulate economic activity in the here and now.

He then goes on to note the although the Fed could be doing more as articulated above, it is not doing so.  In fact, it is letting inflationary expectations falls:


The gap between the yield on 5-year nominal Treasuries and Treasury Inflation-Protected Securities has decreased rather than increased compared with the levels before the crisis, and has been declining again recently. According to this measure, the market expects less rather than more inflation.

In short, the Fed is not stabilizing aggregate demand and consequently deflation is on the horizon.  Here is a figure I often use that shows the spread Hamilton mentions above. It is for the period January 4, 2010 - July 15, 2010: (Click on figure to enlarge.) 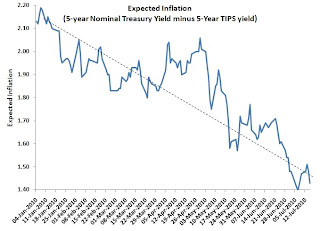 Encouraging, isn't it?
Posted by David Beckworth at 10:31 AM