Rebecca Wilder alerts us to the fact that the drop in inflation expectations is not limited to the United States:

Here is her chart: 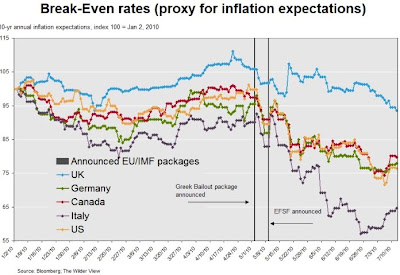 The Fed's monetary hegemon status in conjunction with its loose monetary policy during the early-to-mid 2000s helped create the global liquidity glut at that time. As a consequence, there was an unsustainable boom in global aggregate demand. Now the Fed's superpower status is working in the opposite direction: it is allowing to global demand to slow down. Focus, Ben, Focus!
Posted by David Beckworth at 3:07 PM