Is It Structural or Cyclical Unemployment?

The Economist magazine is asking whether there has been an increase in America's structural unemployment. If the answer is yes then macroeconomic policy may be limited in how much it can do to lower unemployment. Thus, even if the Fed further stabilized aggregate demand the benefits for the unemployed and  the broader economy may be muted.  My own view has been that both structural and cyclical unemployment have been important in this economic cycle. On one hand, the the rapid productivity gains in 2009 (they are down in 2010) point to increased structural unemployment, a point recently made by David Altig. On the other hand, there is evidence consistent with a slowdown in aggregate demand which points to increased cyclical unemployment. 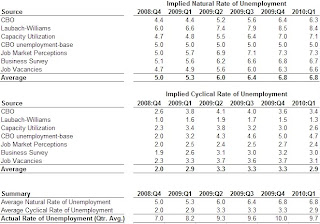 What this table indicates is that since 2008:Q4 cyclical unemployment has been hovering around 3.0% while the natural rate has been growing steadily and now is around 6.8%. This data, if correct, suggests that folks like me who call on the Fed to do more in terms of stabilizing aggregate demand should realize the limits of macroeconomic policy.  Still, providing a stable monetary and aggregate demand enironment in which the structural adjustments can take place should not be overlooked.
Posted by David Beckworth at 1:53 PM