Mathew Yglesias is making the case that the current stance of monetary policy is effectively tight. He invokes the term structure of interest rates to make his case. While I share his view, I believe a far more intuitive and convincing way to make this point is to look at the difference between the nominal interest rates on regular treasury securities and the real interest rates on treasury inflation protected securities (TIPS). The difference or spread between these two series is the market's expectation of future inflation.* To the extent changes in expected inflation are being shaped by monetary policy via its influence on aggregate demand, this measure provides a real time indicator on the stance of monetary policy. This indicator is graphed below using daily data on 5-year treasuries for the period January 4, 2010 - July 8, 2010: (Click on figure to enlarge.) 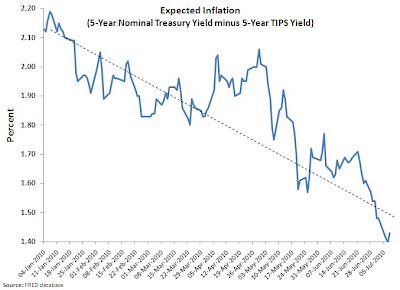 There is a clear downward trend. Now changes in expected inflation can come from both aggregate supply (AS) shocks and aggregate demand (AD) shocks. But given the Eurozone uncertainty, weak economic data, and all the austerity talk of late, the most obvious way to interpret this declining trend is that the market expects aggregate demand to weaken. This interpretation is also consistent with all the chatter about deflation noted by Mark Thoma. And since monetary policy has been doing nothing to stop this implied plunge in AD it is effectively tightening.

Now it is possible that an increase in the liquidity premium coming from the heightened uncertainty is driving some of this decline, but even if true it only serves to strengthen my interpretation. For in that case their is an increased demand for liquid assets of which money is the most liquid. Money demand, therefore, would be rising and velocity falling. So no matter what path you follow you end finding weakening AD and an effective tightening of monetary policy.