The regional variation in economic performance during this Great Recession has been fascinating to watch, especially here from Texas where the economic slowdown has been relatively mild. This state's economic performance has been especially remarkable compared to other big states like California. In this case, the contrast can be easily seen by comparing total employment in California and Texas. Below are the employment numbers for the two states along with some added commentary. First up is Texas: 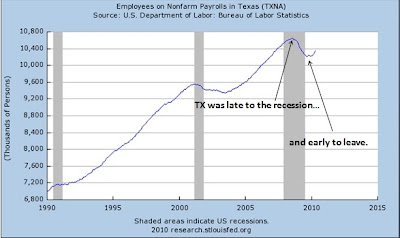 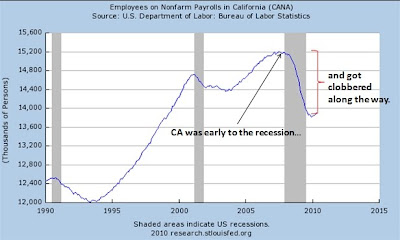 These striking differences naturally lead to discussions of why so much regional variation? Awhile back, The Economist magazine tackled this question for the two states of California and Texas. Now, Fortune magazine has joined the discussion. It argues that (1) Texas has a more diversified economy than California, (2) Texas has more business friendly environment, (3) Texas has done better relying on sales tax rather than on income and capital gain taxes found in California, and (4) the power of the people has backfired in California. In addition to these structural differences maybe California needs its own monetary policy.

Update: In the comments Muirego wonders if Texas is a net recipient of federal tax dollars and whether this explains the discrepancy.  According to the Tax Foundation the answer is no: between 1981 and 2005 Texas on average received 90 cents of federal expenditure for every federal tax dollar paid. See here for more.
Posted by David Beckworth at 5:10 PM