They should look no further than the Macroeconomic Adviser's monthly nominal GDP series.  This is a monthly indicator of total current dollar spending or aggregate demand in the United States.  It shows for August that aggregate spending declined at an annualized rate of decline of  1.69%.  More worrying, though, is that there is a downward trend in aggregate spending over the entire year. This downward trend is consistent with the quarterly forecasts of the Survey of Professional Forecasters that show a drop in the NGDP forecast. Here is monthly NGDP (click to enlarge): 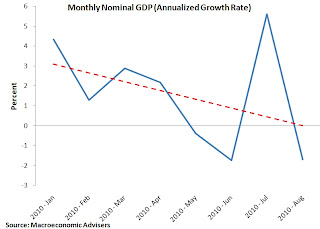 Now these numbers only go through August.  I suspect all the recent QE2 talk--and its effect on   nominal expectations and thus on current spending--may have to some extent arrested  this downward trend in NGDP.  Still the Fed should not let its guard down come the November FOMC meeting.
Posted by David Beckworth at 10:12 AM