QE Has Worked Before: My Reply to Paul Krugman

Paul Krugman appears to be responding to my previous post where I argued it was unfair of him to dismiss Milton Friedman's views based on what happened in Japan.  In his reply he continues to raise doubts about the efficacy of Friedman's monetary prescription for Japan in the 1990s and the United States in the early 1930s.  He then goes on to question those of us who have been calling on the Fed to target the level of aggregate spending through something like a nominal GDP target. Here is Krugman (my bold below):

I think it’s also important to note that Friedman was all wrong about Japan — and that you can argue that he was also wrong about the Great Depression, for the same reason. For what Friedman argued, both for Japan in the 1990s and America in the 1930s, was that all the central bank needed to do was more — push out those reserves into the banking system. This would raise the money supply, and a higher money supply would have the usual effects.
But the Bank of Japan tried that — and found that pushing more reserves into the banks didn’t even lead to rapid growth in the money supply, let alone end the problem of deflation... So, after 2000 the Bank of Japan engineered a huge increase in the monetary base; this was the original quantitative easing. And it didn’t even translate into a surge in the money supply! This is why I’m so skeptical of people who say that all the Fed has to do is target higher nominal GDP growth — in liquidity trap conditions, the Fed doesn’t even control money, so how can you blithely assume that it controls GDP?

Let me begin my response by encouraging Krugman and other monetary skeptics to have a little more faith in the power of monetary policy.  Here is why: QE has been done before in the United States and it worked incredibly well.  It was initiated in early 1934 when FDR and his treasury officials decided to (1) devalue the value of the dollar relative to gold and (2) quit sterilizing gold inflows.  Now this was a radical move at the time, much like QE2 is to many folks today.  The gold standard was viewed then almost as a sacred institution.  FDR was going to weaken it and allow prices to permanently increase.  How dare he! But that is exactly what was needed, a big permanent shock to inflation expectations that  served to stop the deflationary spiral, end the liquidity trap, and allow a recovery in aggregate demand.  Now this policy move was backed up with significant and permanent increases in the monetary base over time: it went from about $8 billion right before the policy change to about $24 billion by the end of the 1930s.  Below are two graphs that shows this remarkable QE program at work.  Here is the monetary base and M2 (Click on figure to enlarge.): 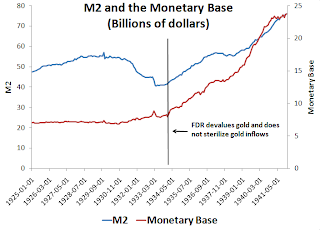 Note how the increase in the monetary base was followed by an similar increase in M2.  Monetary policy--in its unconventional form--was able to influence the money supply.  And note the slowdown in the monetary base in 1937 was followed by a slowdown in M2.  This is when the Fed decided to stall out FDR's QE program and in the process help create the recession of 1937-1938. (See Francois R. Velde for more on this recession.)
What about total current dollar spending? Here too, FDR's QE program also served to stimulate aggregate spending as seen in nominal GNP: 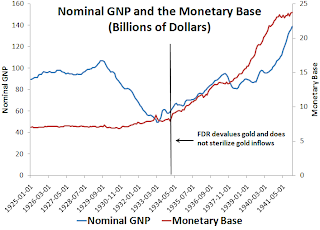 Again we see that nominal GNP closely tracks the surge in the monetary base.  FDR's QE was a smashing success when it came to shoring up aggregate spending.  So those of us folks who want the Fed to increase and stabilize nominal GDP have a good reason to believe it is possible--it happened before.
So let's recap the highlights here:

(1) QE was tried before in the United States during a liquidity trap and worked incredibly well.

(2) QE not only worked well, but it did so in an economic environment far wore than that found in either Japan in the 1990s or the United States today.


(3) QE worked  because it (i) it reshaped inflation expectations and (ii) was backed up with meaningful increases in the monetary base.
The Fed is more than able to do the same today.  It certainly can reshape inflation expectations.  Just look at what has happened to them over the last month or so when Fed officials started talking up QE2.  The Fed would be far more effective, though, at shaping inflation expectations by explicitly committing to some nominal target. Thus, the Fed needs to come out this week with more than an announcement that it is going to purchase say $500 billion assets going forward.  It also needs to shake up inflationary expectations and do so in a manner that creates certainty going forward.  The Fed, then, needs to (1) announce an explicit nominal target and (2) say it will do whatever is necessary to hit it (i.e. it will buy/sell as many assets as needed). I just hope it is a level target for total current dollar spending.

Update I: Josh Hendrickson reminds us that QE seems to be working rather well in the U.K.
Update II: The M2 and monetary base data come from Friedman and Schwartz (1963) while the nominal GNP data come from Balke and Gordon (1986).
Posted by David Beckworth at 11:38 PM