One argument against further easing by the Fed is that the main source of U.S. economic problems is structural in nature and cannot be addressed by monetary policy.  In particular, the balance sheets of households have collapsed and require a significant amount of painful deleveraging.   More monetary stimulus cannot  change that fact.  QE2, therefore, ultimately will be an exercise in futility.  This critique has been thrown at me a lot lately and so let me address it here.
First, I agree that there are big structural problems with the household sector and that they are driving much of the problems elsewhere.  Households spent the past decade leveraging up and now they are having to reverse this buildup of debt given the collapse of the asset side of their balance sheets.  This household balance sheet problem in turn got  transferred to the government balance sheet and is also currently influencing aggregate spending choices. So yes, this is a structural problem and requires some radical structural solutions like swapping the underwater portion of mortgages for equity. Felix Salmon suggests some other structural solutions.
Now just because this is a structural problem it does not follow that monetary policy cannot contribute in a productive manner to the deleveraging.  In fact, monetary policy can actually make this structural adjustment easier to do.  How so?  There are two ways.  First, monetary authorities could push the price level back up to trend and reduce the real debt burden facing Americans.  During the past recession the price level actually fell and this deflation made it more costly to service existing nominal debt.  In other  words, the drop in dollar incomes  along with the drop in the dollar price of assets were not matched by similar drop in household dollar debt.  Moreover, this price level decline never returned to its (unofficial) 2% trend path and according to the FOMC's forecast is not headed back to it anytime soon.  Chicago Fed president Charles Evans made this point in a recent speech with this figure: 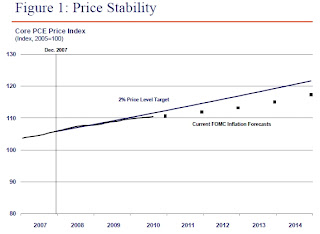 QE2, then, could help houesholds better cope with the deleveraging by pushing up dollar incomes and dollar prices of assets.
The second way QE2 would provide support to deleveraging households is that it would increase total current dollar spending.  This development, in turn, would in the presence of sticky wages and prices increase real economic activity and boost the real income of households. For those who doubt the ability of the Fed to increase aggregate spending should look to the pick up in expected inflation coming from treasury bonds.   This increase in expected inflation is ultimately a signal that the bond market believes aggregate spending--the underlying cause of inflation assuming no big changes in aggregate supply--will pick up in the future.  And if aggregate spending and inflation are expected to pick up in the future this belief in turn will affect current spending choices. With higher real incomes, households will be better able to service their debts and deleverage their balance sheets.  Thus, QE2 by pushing the price level back to trend and increasing real incomes will provide much needed support to main structural problem facing the U.S. economy.
P.S. I am not arguing we return asset prices to bubble levels, but that we simply return overall prices or the price level to the 2% trend.  This would imply some increase for asset prices too.

P.S.S.  I would rather have QE2 return aggregate spending to its trend level rather than return the price level to its trend for reasons laid out here.  For now, though, I will settle for a price level target.
Posted by David Beckworth at 5:55 PM