[Milton Friedman] would look at growth in income. "He considered stable nominal [unadjusted for inflation] income growth desirable because sudden swings in it (and thus in spending) cause huge macroeconomic disturbances when wages and prices fail to adjust quickly," says economist David Beckworth of Texas State University. Income is growing well below historical norms. POINT: For QE.

Will and I made this point in our Op-Ed and provide some discussion of it here.  The clincher for me, though, is this figure of  the growth rate of final sales of domestic product, a measure of aggregate demand (AD) (Click on figure to enlarge.): 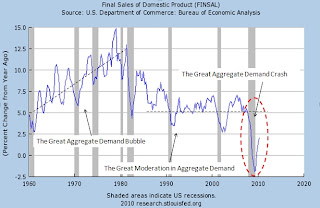 The data in this figure runs through 2010:Q2.  It reveals that AD has a long ways to go before being stabilized. Milton Friedman wouldn't be please with the results shown in the above figure.  Because of this AD shortfall and other reasons, I personally would like to see the Fed target some measure of aggregate spending such as a NGDP level target.  Though probably low on the list of nominal anchors the Fed is likely to adopt, the FOMC actually discussed the possibility of a NGDP level target in its last meeting.
The second point I want to elaborate on is that Friedman would argue the Fed is not out of ammunition.  Here is Wessel:

Friedman would have scoffed at the notion that the Fed is out of ammunition. He believed in the potency of "quantitative easing," or QE—printing money to buy bonds. "The Bank of Japan can buy government bonds on the open market…" he wrote in 1998. "Most of the proceeds will end up in commercial banks, adding to their reserves and enabling them to expand…loans and open-market purchases. But whether they do so or not, the money supply will increase…. Higher money supply growth would have the same effect as always..."

Nowhere in this quote does Friedman say a temporary increase in the money  growth rate is the goal.  He says a higher money supply growth rate, period.  That is why I think Paul Krugman's comments on this piece are off.  Krugman says that Friedman's call for Japan to increase the monetary base in the above quote were insufficient because Japan tried it and it didn't work.  No, Japan did not try what Friedman suggested.  Rather, Japan only added temporary injections of montary base that were pulled out once price level stability was reached.  Thus, to argue Friedman's prescriptions for Japan were wrong one has to argue that he called only for  temporary increases in the monetary base. But he did not make that call.  Here is Scott Sumner on  Japan's approach to monetary policy:

What happened in Japan is precisely what proponents of QE in the US (such as Krugman and I) predict would happen. The BOJ adopted a policy of raising rates and reducing the money supply any time inflation rose above zero. (Bernanke mentioned this aspect of the BOJ's policy in his Jackson Hole speech.) This sort of policy will not result in inflation, because the monetary injections will be viewed as temporary. And indeed they were, the BOJ reduced the monetary base by about 20% in 2006, just as inflation was rising above zero. This prevented an outbreak of inflation. In Japan the CPI is still at 1993 levels, which is of course consistent with the BOJ's announced target--stable prices. By this standard the BOJ has been the most successful central bank in world history. Whether a stable CPI is good for the Japanese people is an entirely different matter.

It is unfair to attribute to Friedman the Bank of Japan's policy goals.  Krugman's claim that Friedman called for  "just printing notes" and nothing more like shaping expectations ignores the fact that Friedman actually understood the value of shaping inflation expectations.  It was Friedman, after all, that called for the Fed in the early 1990s to target the expected inflation rate implied by the spread between the nominal yield on Treasuries and the the real yield on TIPs.  Friedman knew the importance of managing inflation expectations.
Posted by David Beckworth at 10:12 AM