Is This Really It?

I want to believe but will wait for further confirmation that the uptick in expected inflation--a proxy for  expected aggregate demand--is truly a change from the downward trend of January-September 2010.  For now, though, it does seems all the chatter coming from William Dudley, Brian Sack, Eric Rosengreen, Charles Evans, and other Fed officials on QE2 is doing a great job in changing inflation expectations.  Here is the expected inflation rate on the five-year treasury up through October 5 (Click on figure to enlarge.): 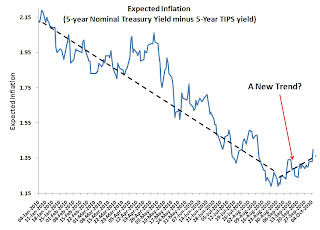 I was planning on waiting for further confirmation before commenting on this apparent shift in inflation expectations, but decided to go ahead and note it given its recognition by Paul Krugman. So here are my thoughts:
(1) This upward movement in expected inflation means the Fed has already begun a passive easing of monetary policy well before the actual QE2 has been implemented. Because future economic activity influences present economic activity, the Fed is already influencing current aggregate spending by altering expectations.
(2)  There is still an overall downward trend for 2010.  This downward trend means the Fed allowed passive monetary tightening for most of the year and it now is being reversed.   There is a lot  of ground to made up.
(3) Nothing guarantees that this uptick has permanently changed the downward trend for 2010. As can be seen in the figure above, expectations started to recover in April by a similar amount but subsequently fell as the Eurozone mess intensified and drove up the demand for liquidity.  Something similar could happen this time too as there are still plenty of problems lurking in the global economy.  Moreover, we may get to the November FOMC meeting and find the actual QE2 may be much less than the market expected. Not everyone on the FOMC is supportive of QE2. This too would push expectations back down and led to more passive tightening of monetary policy.
(3) Right now the change in expectations is based on the chatter coming from Fed officials.  This requires carefully examining their words and determining how much influence each Fed official has on the FOMC.  How much better it would be if the Fed followed Milton Friedman's suggestion outlined in his book Money Mischief and set an explicit target for the expected inflation rate. This would add more certainty than currently comes form diving the words of Fed officials. I actually would prefer--and believe Friedman would endorse it--for the Fed to target expected NGDP.  But for reasons outlined by Karl Smith, I would settle for an explicit expected inflation target at this point.
So is this really it? Has the Fed finally decided to get serious about stabilizing nominal spending?  I hope so.

Update: Dallas Fed President Richard Fisher in a speech today suggests that the market might be ahead of itself in assuming that QE2 is done deal (my bold):


I am afraid that despite recent speculation in the press and among market pundits, we did little at that meeting to settle the debate as to whether the Committee might actually engage in further monetary accommodation, or what has become known in the parlance of Wall Street as “QE2,” a second round of quantitative easing. It would be marked by an expansion of our balance sheet beyond its current footings of $2.3 trillion through the purchase of additional Treasuries or other securities. To be sure, some in the marketplace―including those with the most to gain financially―read the tea leaves of the statement as indicating a bias toward further asset purchases, executed either in small increments or in a “shock-and-awe” format entailing large buy-ins, leaving open only the question of when.
[...]
There is a great deal of legitimate debate still to take place within the FOMC on the subject of quantitative easing and the pros and cons and costs and benefits of further monetary accommodation. Whatever we might do, if anything, must be consistent with long-term price stability and not add to the nightmare of confusing signals already being sent to job creators.

Posted by David Beckworth at 8:09 AM