What the GDP Report is Screaming to the Fed

There is a loud and clear message coming from today's BEA report on the U.S. economy:  it is time for the Fed to adopt an level target for total current dollar spending.  The report showed that final sales of domestic product grew at an annualized rate of only 2.4%.  This is far too weak of a growth rate in aggregate demand for there to be a robust recovery.  Moreover, it means that  that total current dollar spending is falling further below its long-run trend.   This can be seen in the figure below: (Click on figure to enlarge.) 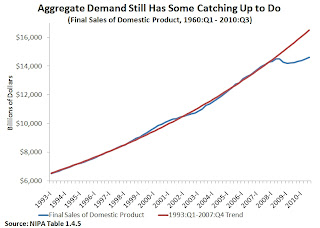 The fitted trend puts final sales at about $16.5 trillion.  Actual final sales is around $14.6 trillion, a whopping $1.9 trillion shortfall.   That the Fed can let aggregate demand fall this far below trend is mind-boggling.  It is even more staggering when one considers that there were forward-looking indicators all along that were telling the Fed it was passively tightening monetary policy by allowing this development to happen.  This need for an aggregate demand target is further supported by the following two figures.  The first one shows the year-on-year growth rate of final sales of domestic product over the most of the postwar period.  It  shows how far aggregate demand has to go just to get back to a normal growth rate of about 5%. (Click on figure to enlarge.) 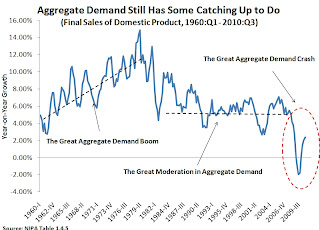 The next figure shows the key reason--other than the Fed's failure to act aggressively enough--why total current dollar spending is so depressed.  This figure shows that money demand, as measured by velocity, is still relatively high (note: velocity and money demand are inversely related). There is still a monetary disequilibrium problem out there: there is excess demand for highly liquid assets and the Fed has failed to offset it.This is a point made repeatedly by the us Quasi-Monetarists  (Click on figure to enlarge.) 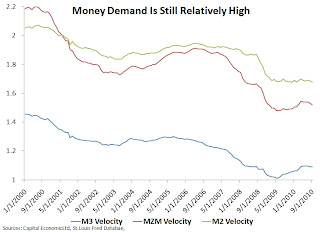 Is it really that hard to get total current dollar spending back on path?  I think not, all that is needed is for the Fed to (1) announce an explicit nominal spending target and (2) then say it will do whatever is necessary to hit it (i.e. it will buy/sell as many assets as needed). Thus, I think calls for "shock and awe" by the Fed--such as Goldman Sachs claim that the Fed needs $4 trillion to be effective--are wrong. The Fed simply needs to convince the public it is committed to an explicit target and most of the heavy lifting will occur on its own in the market.  We see glimpses of this with the uptick in expected inflation associated with all the Fed chatter about QE2.  In this case, the Fed has done nothing official yet l the market is already pushing expected inflation up.  Just think how much more effective it would be if the Fed was explicit and publicly commit to a nominal anchor. Shaping expectations is key to the Fed's success here.
The question then comes back to why an aggregate spending target?  I have talked about this policy goal before, so let me draw from it:


[Though I want higher inflation now] I have never been enthusiastic about stabilizing inflation as an end in itself.  The reason being is straightforward: inflation is a symptom, not an underlying cause.  More generally,  the percentage change in the price level could be the result of shocks to  aggregate demand (AD), aggregate supply (AS), or both.  Currently, it seems clear that the drop in inflation expectations and the drop in core inflation are reflecting faltering aggregate demand.  Thus, it makes sense to talk about the need to arrest these drops.  However, it need not always be the case--low inflation could also be the symptom of a positive AS shock (e.g. productivity boom).   Imagine, for example, aliens land and give us new technology that makes our computers faster, gives us clean energy, and allows us to travel to  distant galaxies.  Such an alien encounter would create mother of all productivity booms.  Among other things, this productivity boom would imply a higher neutral interest rate, lower inflation rate, and robust AD growth (given  the increase in expected future income).  In such a case a rigid inflation target of say 4%, as some have proposed, would not make  sense here.  Most likely it would be too high an inflation rate to keep AD stable.
Another way of saying all of this is that monetary policy should focus only on that over which it has meaningful control:  total current dollar spending or AD.  It should ignore AS shocks, both the good and the bad, because all it can do by responding to such shocks is to make matters worse  as alluded to above.   Focusing too narrowly on an inflation target--which assumes every shock is an AD one--can cause a central bank to make this very mistake.  I made this case before in  more detail in this post which got some play time in the economics blogosphere (e.g. Mark Thoma reposted it here).  My hope was that this post would help folks see that the stabilization of AD rather than inflation targeting should be the key  objective of monetary policy.

So what kind of monetary policy would serve to consistently stabilize AD?  The answer is one that directly targets a stable growth path for AD. This could be a NGDP target or a final sales of domestic output target or any measure that directly aims to stabilize the growth of total current dollar spending.  Scott Sumner outlines its advantages in a recent post, but let me add a few thoughts.  First, an AD target is easy to implement.  All it requires is a measure of the current dollar value of the economy.  It does not require debates over the proper inflation measure, inflation target, output gap measure, and coefficient weights that plagued inflation targeting and the Taylor Rule.  Second, it can easily be made into a forward-looking rule by having the Fed targeting the market's forecast of AD.  This would require some innovations such as  NGDP futures market, but it is within the realm of possibilities as shown by Scott Sumner.  Finally, it could be easily communicated to and understood by the public by labeling it along the line of a "total cash spending target."

So FOMC officials take note: the BEA report is screaming to you it is time to get serious about stabilizing total current dollar spending.

Update: Yes, NGDP grew at about twice the rate of final sales in Q3.  But that is because there was a sizable buildup in inventories (i.e. NGDP - final sales = change in inventories).  For this reason, final sales is a better measure of actual aggregate demand than NGDP.  With that said, I would be delighted if the Fed started targeting the level of NGDP.  Any aggregate spending target would a big improvement in my view.
Posted by David Beckworth at 3:05 PM