Scott Sumner summarizes the key tenets of those who observers, including myself, who have been labeled as quasi monetarists by Paul Krugman :


1.  Like the monetarists, we tend to analyze AD shocks through the perspective of shifts in the supply and demand for money, rather than the components of expenditure (C+I+G+NX).  And we view nominal rates as an unreliable indicator of the stance of monetary policy.  We are also skeptical of the view that monetary policy becomes ineffective at near-zero rates.

2.  Unlike monetarists, we don’t tend to assume the demand for money is stable, and are skeptical of money supply targeting rules.

As I noted before, quasi-monetarists are not that different from other folks who see an AD problem in the economy.  One defining difference, though, is that quasi-monetarists see the insufficient AD issue ultimately as an excess-money demand problem and believe the Fed could meaningfully address it.   Another defining difference is that quasi-monetarists were calling for more Fed action long before it was vogue.  Thus, early on in the recession when other folks were calling for fiscal policy to address the AD problem, quasi-monetarists were instead calling for the Fed to step up and address the fall in nominal spending.
Does the quasi-monetarist's emphasis on excess money demand have any merit? Is there any evidence that the AD problem is ultimately an excess money demand problem?  Drawing on Gary Gorton's work that shows repos are a form of money--an understanding supported by the fact the now discontinued M3 money supply  included repos--for the shadow banking system, the blogger 123 presents evidence from a natural experiment around the time of the Lehman collapse that  shows there was a sudden spike in the demand for money.  Below are charts that present further evidence that there has been an elevated increase in the holdings of cash and other highly liquid (i.e. cash equivalent) securities by households, businesses, and banks.  These charts come from Eric Rosengren's recent speech:  (Click on figures to enlarge.) 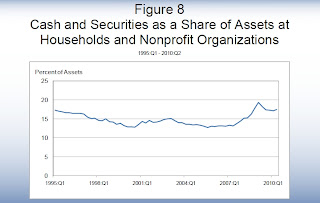 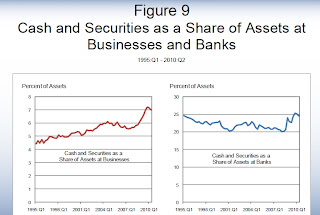 Though Eric Rosengren does not call himself a quasi-monetarist, his speech is consistent with this view: it argues there is a AD problem, it shows the above graphs that indicate an elevated increase in money demand, and it calls for more aggressive Fed action to address these problems. Rosengren's implicit endorsement of the quasi-monetarist's view is probably not unique.  I suspect most folks who see the need for more Fed action would, after some reflection on the excess money demand take on the AD problem, consider themselves a quasi-monetarist.  Are you?
Posted by David Beckworth at 10:14 AM